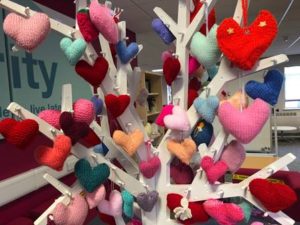 Rev Dr Chris Swift is Director of Chaplaincy and Spirituality at Methodist Homes (MHA). Before joining Methodist Homes in 2017, he spent most of his ministry serving in chaplaincy in the NHS. An Anglican Priest for 30 year, he has studied and written extensively about chaplaincy and the role of spiritual care. Chris is also Visiting Professor in Religious, Spiritual and Pastoral Care at Staffordshire University.

Given that care homes have been at the centre of the impact made by the virus, especially during the first wave, supporting people’s spirituality has been critical. At one point, with a UK death toll of 50,000, upwards of 20,000 of those deaths had been in care homes. Yet less than 1% of the population lives in care homes. This illustrates the devastating impact the virus has brought to places usually seen as centres of safety and care for people in later life. Methodist Homes (MHA) is a charity created by the Methodist Church in 1943, now largely autonomous of the Church itself. However, across its 90 care homes and over 70 retirement living schemes it provides chaplains in each and every setting.

Ever since joining MHA I’ve been impressed by the creativity of our chaplains. When I visited one care home in Derbyshire pre-pandemic, I was told a story by the chaplain which may serve to illustrate how we are creative in supplying pastoral support in ‘normal’ times. But it may also help to give insight into why the impact of the pandemic has been so challenging.

As happens from time-to-time, a resident had died. The funeral was the previous day and none of the residents were able to attend. The following day, the chaplain and a few residents were doing some ‘indoor gardening’ in one of the home’s lounges. Potting bulbs to ensure some vibrant colour in the coming months. The manager walked in with a wreath, explaining: ‘It’s from the funeral yesterday. Edith’s family asked the undertaker to drop them off here. Can you do something with them?’ The chaplain and residents agreed and took the flowers. They talked about what to do and decided that they should take the wreath apart and remake it into a beautiful display in memory of Edith. Perhaps, they debated, they could put it in a prominent place with a little card saying from where the flowers came.

They set the bulbs and pots to one side and began dismantling the wreath with great care. As they did so, the chaplain and residents spoke about Edith. They remembered her with laughter and some tears, addressing the task in hand, but allowing their focus and activity to speak warmly and with candour. When the new arrangement had taken shape, and they stood back and admired its beauty, the chaplain paused. She knew that one of the residents in the group was an atheist, so she asked with sensitivity whether everyone would be happy for a prayer to be said in memory of Edith. All the residents agreed, so the prayer brought together the beauty of creation which Edith had enjoyed so much during her life; the laughter and the tears; Edith’s family, and all the residents and staff in the home. Then the flowers were indeed placed where everyone passed on the way to the dining room.

This was all before COVID-19. Since March 2020 MHA Communities have restricted contact with non-essential visitors. For chaplaincy, this has presented a unique and daunting challenge: how to continue making the kind of connections and creativity in bereavement support demonstrated by the experience described above. In research conducted by MHA several years ago, a key finding was the role of chaplaincy in ‘bringing the outside world in; and taking the inside world out’. The chaplain acts in a role academics sometimes call a ‘boundary-spanner’ (1). During the pandemic this vital role of fostering connections and relationships has been challenged. When the boundary is sealed, how are links to relatives, friends, and the community sustained?

At MHA, with thought and determination, new ways were found to connect people, and the chaplains were often at the forefront of enabling and facilitating them. In June 2020 the traditional MHA Sunday observed in Methodist churches took place online for the first time. People from across all our services made contributions to the liturgy, representing the breadth and depth of the services we offer to older people. The recording was premiered on YouTube and enabled supporters, residents and relatives to share the video experience together.

On 4 September, we held our first national Memorial Day. This involved another premier on YouTube (but also DVDs sent to all chaplains). Many of MHA’s 20,000 residents and members and 7,000 staff participated in the service and there was a two-minute silence at 11 am to remember everyone who had died during the pandemic. Relatives were also invited to participate in the service via an online link. In addition to the video, we used knitted hearts provided by MHA supporters to decorate a tree during the moment of silence to represent love for the many people mourning a loss. For the Memorial Day every MHA service was also sent a special memorial candle to be lit during the time of silence. This enabled the tangible to connect with the virtual and allowed people to feel connected across the organisation. 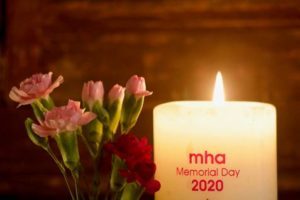 MHA has been fortunate in having chaplains on the staff of homes in order to provide specific support for the spiritual consequences of COVID. This will be an ongoing task of ministry as people live with the experiences they have endured. As strong communities, homes and retirement living schemes have been able to share collective support and there have been many moments of light in the darkness. Moments such as MHA Sunday and the new Memorial Day have expressed links and connection despite the restrictions under which we have had to operate.

(1) Wallace, C., Farmer, J. and McCosker, A., 2018. Community boundary spanners as an addition to the health workforce to reach marginalised people: a scoping review of the literature. Human Resources for Health, 16(1), pp.1-13.