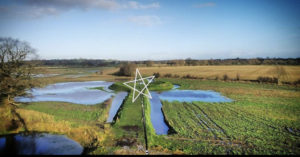 Rev Deborah Walton is a vicar of the PEW Group of Churches and a school chaplain in North Shropshire. For our Community Voices,  Deborah reflects on the experience of Covid-19 and what that has meant for communal rituals in rural communities. She shares her journey of collaboration with Tim Ashton from the Soulton Hall to come up with creative ways of using outdoor spaces for staging community-based Christmas festivities.

The celebration of Christmas in churches is usually steeped in both general and local tradition. People have high expectations that each year we will have the same pattern of services or events during which we recount the salvation history of the Christian faith up to and including the birth of Jesus.

For many churches, Christmas services are not only attended by those who come regularly throughout the year but also by many for whom this is one of the few times that they attend church. This regular annual attendance is an important part of their own expression of faith and part of how they, as an individual or family, mark the Christmas season.  Most people tend to come to one of three services: a Crib Service, aimed primarily at children which recounts the story of Christmas often with children acting the parts and ending with them gathered around the crib containing a doll representing the baby Jesus; Nine Lessons and Carols which is usually a candlelit service of nine scripture readings interspersed with the singing of carols; midnight Holy Communion on Christmas Eve, the celebration of the first Holy Communion of Christmas when through liturgy, scripture reading, sung carols and prayers we celebrate the gift of the Christ-child to the world. These special services usually include hospitality, food, and drink after the service. Covid restrictions meant that we anticipated not only having to restrict numbers at services but also not being able to provide our usual hospitality.  For many people, the social interaction before and after a church service is as important as the spiritual-religious element.

We started to think about how we might be able to engage and share the story of Christmas with children and families in a way that was safe and accessible. We were seeking to reach those who would usually attend one of the Christmas services and to find an innovative way to share the Christian story of Christmas. At this time, I was approached by Tim Ashton of Soulton Hall.

Tim, a local farmer, had turned one of his fields into an outdoor performance space, the Sanctuary Theatre. This space had been used by the National Youth Theatre (NYT) for a performance at the end of October 2020. The Covid risk assessment for this performance was approved by the Department for Culture Media and Sports. Both Tim and NYT kindly shared both the risk assessment and their learning from putting on the performances. With this blueprint, I found a willing and experienced amateur scriptwriter who used the Scriptural texts of the Christmas narratives and the format of our traditional Christmas Services to write a promenade play to be performed at the Sanctuary Theatre and the adjoining fields and garden. The result was a modern-day retelling of the ancient story highlighting contemporary themes and issues, entitled Nativity Unlocked.

Our motivation was to open up our usual rituals to those who might not otherwise participate, to create memories for families which children would remember as something special and unusual from the Christmas celebrated during the pandemic.

We had hoped that local actors and musicians would welcome the opportunity to perform. While we found musicians, technical help, and volunteers to steward, we struggled to attract actors. We were planning to abandon the project when we were rescued by Sarah Carter, the Head of Drama at Thomas Adams’ School in Wem. Due to Covid restrictions, her pupils had not been in any performances since March 2019. She cast students in year group bubbles and rehearsed them separately. We were fortunate to cast a musical theatre student and a final year university drama student into two of the lead roles. The local youth group offered to lead the audience to the theatre space from the car park field by a lantern procession. Tickets were advertised on social media and sold out on Eventbrite within four days. Given the time constraints, there was only one rehearsal the weekend before the play. On the evening of the play, it was blowing a gale and pouring with rain. Fortunately, having set the play in modern times actors were able to dress for the weather and perform in waterlogged fields!

Like any ambitious project, it had its moments of stress and anxiety!  All outdoor events are at the mercy of the weather and however you plan for this, poor weather conditions adversely impact on the experience for everyone involved.  The pandemic impacted on the availability of people, some of the actors became unwell or were in households with others who were unwell and had to isolate. Having to plan an event ensuring that there were sufficient people involved to cover these eventualities added to the complexity of the project. We were surprised that we were unable to find local acting groups willing to be involved in this project. We would not have been able to proceed without the involvement of the school.

In the end, the play was put together by the local community for the local community.  Many of those involved and attending had little or no connection with the church. Many came because there were no other options for having a family outing to celebrate Christmas. We had lovely positive feedback from the actors, volunteers, and audience. No one involved or in the audience had done anything quite like it before!

Through this play, we invited others to enter into the sacred writings, songs, and the story of Christmas. We unlocked the story in a new way, for this season of the pandemic. The scriptwriter reflecting on the evening wrote: “It was an atmospheric and poignant evening despite the persistent battery of rain and the grim shadow of the pandemic. A good memory of Christmas 2020. The spirit of the Nativity was indeed unlocked.”