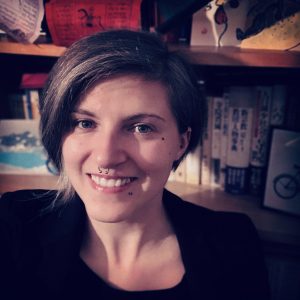 Dr Paulina Kolata holds a PhD in Japanese Studies from the University of Manchester. Paulina’s work is informed by her background in Japanese and Religious Studies and Social Anthropology with a strong orientation towards ethnographic and participatory research methods. In her work, she investigates ethnographically religious change and crisis response, demographic disruption, materiality, death and memorialisation rituals, religious waste-making, as well as religion and economy. She is a qualitative researcher collaborating with Buddhist communities in Japan and minority religious communities in Britain and Japan. Following a 12-month period of ethnographic fieldwork and living at a family-run Buddhist temple in Hiroshima Prefecture, her doctoral work investigated how people continue and fail to belong in crisis in Buddhist temple communities in depopulating Japan.

She is currently working on a book manuscript based on her doctoral work titled Doing belonging in troubled times (The University of Hawai’i Press). Prior to her joining Ritual Innovation project, she has been working as an Early Career Research Fellow with ‘Religion and Minority’ project at the University of Manchester and as a Lecturer in Religious Studies at the University of Chester where she has been teaching courses on qualitative research methods and anthropology of religion.