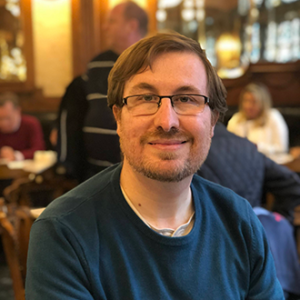 Dr Joshua Edelman is senior lecturer at the Manchester School of Theatre, Manchester Metropolitan University. Though his original training is in the anthropology of religion, he has worked for over a decade as a theatre director, largely in Dublin and New York. His research looks at both theatre and religion as fields of social performance, especially in the contemporary West. He is the editor of the journal Performance, Religion and Spirituality (prs-journal.org) and a member of the Project on European Theatre Systems (STEP). His books include Performing Religion in Public (co-edited with Claire Chambers and Simon du Toit, Routledge 2013) and The Problem of Theatrical Autonomy: Analysing Theatre as a Social Practice (co-authored with Quirijn van den Hoogen and Louise Hansen, Amsterdam University Press, 2016). He has written about topics including progressive Jewish liturgical music, the scandal of false witness in testimonial theatre, the Oberammergau passion play, sacred space and the Occupy Wall Street movement, rituals of healing and anger in response to the sexual abuse crisis in the Irish Catholic Church, and the value theatre holds to its audiences in journals including including Performance Research, Cultural Trends, Amfiteater, Nordic Theatre Studies, Ecumenica and Liturgy. Originally from the US, he now splits his time between London and Manchester, two wonderful places for art, theatre, running, and explorations of the beautiful English countryside.